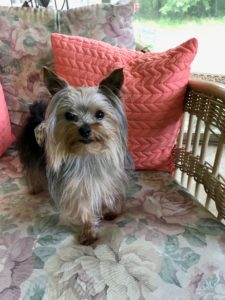 Much of my writing time this month has been sidelined by this little guy. His name is Peluche, a Spanish word meaning plush, also stuffed toy, cuddly toy, stuffed animal, teddy bear, etc.  I call him Teddy. He came to me last December after having liver shunt surgery in Michigan. Little Yorkie Rescue, in Lorain, Ohio asked me to foster him since I had experience caring for my Yorkie, Hemingway, after his liver shunt surgery. I agreed to the 3 – 4 month rehab until he would be well enough to be put up for adoption.  It was slow going at first. He didn’t seem to understand anything I said. Then I found out through a Facebook post that he came from a Spanish only speaking 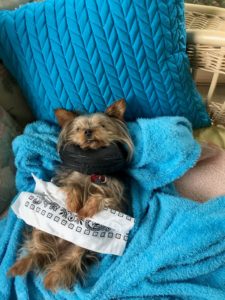 family. Yikes!! I Googled the words and phrases I needed to communicate, but I think my accent was off. Fortunately he was leaning English faster than I was learning Spanish.

He needed regular blood work done to determine his progress. All seemed good at first then he went downhill. Five months later he wasn’t even at a healthy enough point to be neutered. His liver wasn’t working. After more blood tests and an ultrasound, it was determined that he needed ANOTHER liver shunt surgery.

On August 22nd he had his second surgery. It was supposed to last twenty minutes. Due to excessive scar tissue from the first surgery back in December, the procedure lasted almost three hours! We got the word that evening that he was in critical condition and would be monitored throughout the night. He may weigh only three pounds but he’s a little fighter. He’s now happy at home, in his own bed and doing better every day. He even likes chilling with the ice bag. Keep fighting little dude.