The week following the July 4th holiday, I was still in bed with the flu or possibly a GI infection. It was time to see my doctor, but she was on medical leave until September. So I willed myself to leave the house and went to my local Urgent Care Center. I was told that several people had come in lately with similar symptoms to mine and I probably had a nasty GI bug. Just to make sure, I was sent off to a lab for blood work. The next day I received a call from the Urgent Care doctor asking me to come in right away. The good news was that I didn’t have the flu or GI issues––the bad news was she didn’t know what I had, but I was at least feeling better. She took my blood pressure and checked my pulse while we talked. That’s when she said, “Oh, my,” and checked my arms, legs and back. Turns out my heart was skipping beats and I was covered in rashes. She suspected Lyme disease and called the local Cleveland Clinic hospital and let them know I was on my way. 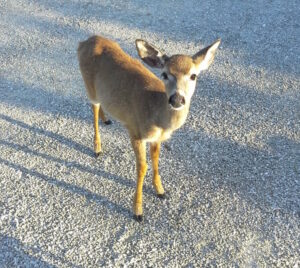 My emergency room stint lasted six hours during which blood was drawn and I was hooked up to various machines and everyone in the department wanted to see my mysterious rashes. The outcome was admitting me to the hospital until my ailment could be identified and treated. Day two confirmed that I had recently been attacked by a nasty deer tick––probably during my marathon paver laying days. Treatment was started and on day four my internal medicine doctor, my infectious disease doctor, and my cardiologist all agreed I could go home––with 21 days worth of pills.

Home sounded good except that I had the energy of a garden slug, I had to wear a heart-monitor, my brain seemed to be in a permanent fog, and oh yeah, I’d left my short-term memory somewhere! After the 21 days of treatment, my infectious disease doctor said I was doing well and he wouldn’t be seeing me again––unless another tick decided to latch on to me. And my short-term memory should return to normal in two or three months, worse case scenario – six months. I’m a writer; I need to keep track of my thoughts! Finishing A Paper Key by the September 1st deadline looked doubtful.